Kudu Ridge Game Lodge is situated a short 15 minutes drive from the Addo Elephant National Park which is home to over 600 African elephants. Our guests enjoy watching these gentle giants on our guided Addo safari tours. African elephants and their behaviours are fascinating. A little-known fact about them is that Addo elephants are afraid of bees!

Back in 2007 Dr Lucy King from the Department of Zoology at the University of Oxford and her team discovered that the sound of angry bees caused elephant to move away very quickly. “African bees emit a pheromone that triggers the bees to attack. You can have 10,000 bees attacking at once. Elephants remember that sound and are terrified by it.” said Dr King.

Researchers also found that despite the fact that elephants have very thick skins, bees are attracted to the water around their eyes and can sting this very sensitive area. Bees also hone in on the elephant’s ears and inside their trunks, also very sensitive areas and painful when stung.

In 2018 Professor Mark Wright published a study after observing African elephants in the Greater Kruger National Park. His findings supported the Dr King’s study that pheromones emitted by bees repelled elephants. He noted: “With their acutely developed sense of smell, African elephants may have either evolved or learned behavioural responses to the scent of the bees’ alarm pheromones.”

Watch this video to see how Professor Wright and his team carried out their research and how the elephant behaved.

Conservationists used this information and started tests to see if active beehives would deter elephants from destroying crops. These were successful and a number of Kenyan farmers now keep beehives to protect their crops from elephants in areas where farmers and wildlife need to co-exist.

The Addo Elephant National Park management has also put similar interventions in place to preserve large trees from being pushed over by Addo elephants. Bee boxes have been placed on top of poles near these large trees to keep the elephants away. So far, unless the elephants are desperate to eat them, they seem to avoid these protected trees.

When we talk to our guests about the wildlife they most enjoy seeing in the wild, elephants are often at the top of their list. We are always delighted to offer guests the opportunity to experience close encounters with elephants in the Addo Elephant National Park, especially during our guided Addo safari tours. 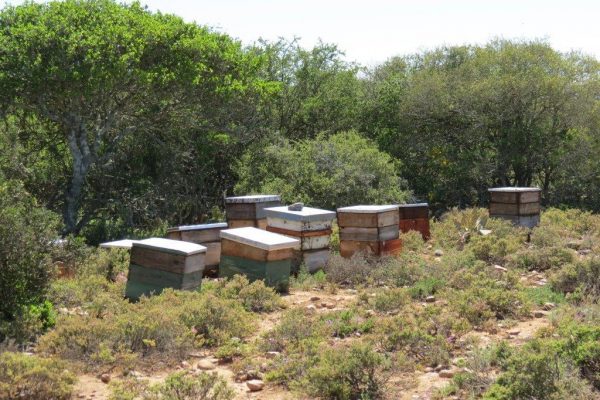 Although we don’t have any elephants at Kudu Ridge Game Lodge we do have bees! We have placed a number of beehives on the reserve and the bees produce delicious honey from the indigenous Addo bush. Come try some delicious Addo honey with your breakfast during you stay.

Enquire about our Addo accommodation and Addo Elephant National Park guided safari tours. We would love to share experiences with these fascinating pachyderms with you.