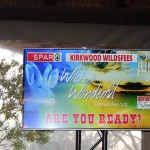 This leading family festival will be home to the first Zip Zap Circus performances in the Eastern Cape,pop group EDEN on stage in the province for the first time after the group got together again, while the youngsters have a wild time in their own festival within-
a-festival. On the giant Windhoek stage will be an array of top South African artists playing late into the Karoo night.

There is also a serious business side to the festival, which hosts the Eastern Cape’s premier game auction, as well as the biggest agricultural show, the Unifrutti Agri Expo, and one of the biggest new vehicle expos in the country.

Hosted in the scenic Sundays River Valley less than an hour’s drive from Port Elizabeth, the Wildsfees is rated as one of the top festivals in South Africa – and one of the only festivals to cater for the whole family.

Other favourite attractions include the Walk on the Wildside experience,skaapkop langtafel, mohair expo and cooking demonstrations or simply
chilling out in the Tiki Island Style Bar.