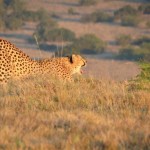 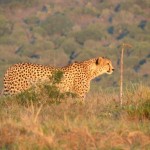 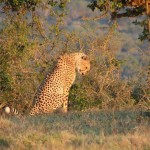 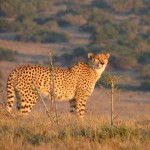 Cheetah’s are the fastest land animal in the world. Their slender, long-legged bodies are built for speed. Cheetahs are tan in colour with black spots all over their bodies. They can also be distinguished from other big cats by their smaller size, spotted coats, small heads and ears and distinctive “tear stripes” that stretch from the corner of the eye to the side of the nose.

In 1900, there were over 100,000 cheetahs across their historic range. Today, an estimated 9,000 to 12,000 cheetahs remain in the wild in Africa. In Iran, there are around 200 cheetahs living in small isolated populations.

Found mostly in open and partially open savannah, cheetahs rely on tall grasses for camouflage when hunting. They are diurnal (more active in the day) animals and hunt mostly during the late morning or early evening. Only half of the chases, which last from 20 – 60 seconds, are successful.

Cheetahs knock their prey to the ground and kill with a suffocating bite to the neck. They must eat quickly before they lose the kills to other bigger or more aggressive carnivores.

Cheetahs are also typically solitary animals. While males sometimes live with a small group of brothers from the same litter, females generally raise cubs by themselves for about a year.

For more interesting facts about the animals in Addo Elephant National Park please look on our website.